This week on WSRR we are highlighting 5 albums that dropped this week in Hip Hop History. 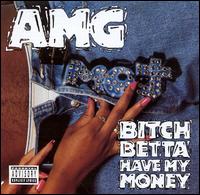 First up we got 2 albums from the same Artist. AMG. Born in New York, coming from Cleveland Ohio, and into to Inglewood CA. AMG was first heard in 1991 on Dj Quik’s album Quik is the Name. December 3rd of 1991, his debut album “Bitch Better Have My Money” dropped. With production by Quik and AMG and a few others, this album reached Gold Status. The lyrics, content, the banging westcoast music.. made this an underground classic. December 5th 2000, AMG returned with Bitch Better Have My Money 2001. Quik, AMG, Bosco, Rhythum D production on this album, didn’t reach the success of the first but still had some good cuts. Here some from both in the mix this week.

December 4th, 2001.. Cypress Hill released “Stoned Raiders”. Their 6th studio album, featured some great MC’s like MC Ten, King Tee, Redman, and Method Man. Best known song is most likely “Lowrider,” but there are other bangers on this album that are in the MIX.

Also Dec 4th 2001. “Bang or Ball” By Mack 10. This 5th album by Mack 10 was on Cashmoney records, mostly produced by Mannie Fresh, except “Hate in Yo eyes” produced by Dr. Dre. Westside Connection came together for “Connected for Life” on this album, though ironically they are no longer connected, well thats another story.. after Mack 10 beat up Ice Cube’s brother in law, for talking reckless. Reportedly Cube didn’t correct the situation before it got physical, hopefully at some point these brothers can come back together. Another stand out cut was “Let it be Known” with Face and Xzibit produced by QDIII we putting this in the mix fa sho.

Last album this week, also dropped Dec 4th 2001. The Ghetto Crooner, Nate Dogg’s Music and Me album. This album in my opinion is still slept on, it reportedly only sold 400,000 copies. Produced by Dre, Mel-man, Jermaine Dupri, Fredwreck, Damizza, and features guests Xzibit, Pharaoh Month, Jermaine Dupri, Kurupt, Snoop, Eastsidaz, Fabolous and more. Need i say why this album is slept on and in the MIX. Without further ado lets go…